Bridging community food systems and urban planning matters, now more than ever. Over the past fifteen years, more than 100 scholarly publications on the topic have appeared in architecture and urban planning journals worldwide and over 90 local food systems strategies have been released by local administrations in the Global North alone. On October 15, 2015, the first international urban food policy agenda – the Milan Urban Food Policy Pact – was signed by more than 100 cities and set a precedent, charting a new avenue for sustainability-minded planners. Unsurprisingly, thus far, research has not kept the pace with these innovations, leaving many opportunities untapped and the limits and promises of urban food planning insufficiently understood.

Against this backdrop my research, and my new book “Urban Food Planning: Seeds of Transition in the Global North” (Routledge, 2016), seek to lay the groundwork for urban food planning scholarship and practice from a global perspective. A central goal of this endeavor is to systematically assess and celebrate the emergent food systems planning initiatives and support the work of an increasing number of researchers, community advocates, and policymakers striving to advance sustainable cities and community food systems in tandem. To this end, I examine emergent urban food planning innovations through the lens of theories of sociotechnical transitions which enable me to discern the nonlinear dynamics of socio-spatial change and identify levers that can help steer future urban and food systems transitions. While the boundaries of the field are still in the making, it is fair to say that it encompasses both efforts to facilitate alternative practices, like urban agriculture and shopping at farmers markets as well as efforts to address anomalies in the mainstream food system, such as unequal access to fresh food retail, disproportionate urbanization of prime agricultural land, wobbly disaster preparedness of food distribution and transportation networks, and inefficient or nonexistent organic waste recycling infrastructure.

The practitioners behind innovative urban food planning practices are a broad constituency of urban food policy “entrepreneurs” having the common goal to make the urban food system work in the public interest to generate healthy, prosperous, and ecologically sound human settlements. Urban planners are just one group of practitioners across the many private practice professionals, activists, and government officials from a wide range of economic sectors and disciplines at the forefront of its development. Planners have, however, played a key role in advancing the urban food planning agenda by developing dedicated policy guides on the subject, creating working groups in their professional and academic associations on both sides of the Atlantic (e.g., the Food Interest Group of the American Planning Association [APA-FIG] in the US – the authors of this Blog, and the Sustainable Food Planning group of the Association of European Schools of Planning in Europe), and popularizing the topic through scientific journals, books, and academic conferences.

The evidence shows that urban food planning has grown into a new niche for social innovation, research, and practice and there are plenty of reasons and unique opportunities for planners to make a difference, while doing what they already do, only better. Planners who see food as priority in their work are still a minority, however, the public understanding that food is an urban system and that ensuring its sustainability is part of the responsibilities of local governments, in both developed and developing counties, has started gaining prominence over the past decade. In “Urban Food Planning,” I argue that there are at least 10 good reasons why now, more than ever, it is in planners’ interest to engage with urban food planning. Among these, are a rapidly expanding food systems planning community of practice to work with, a rising demand for expertise in urban food planning from both public, private, and civil society sectors, the potential for increasing the legitimacy of planning interventions, and the new Sustainable Development Goals (SDGs) mandated by the UN 2030 Agenda for Sustainable Development.

Urban food planning – the bundle of government, business, and civil society practices aimed at building sustainable cities and food systems in tandem – is a “hybrid” social niche in-the-making, encompassing a host of creative conceptual, analytical, design, and organizational responses to fundamental questions such as: What’s wrong with the urban food system? Why should we care? How do we fix it? and Who is in charge? In fact, urban food planning is both a distinct practice and a bundle of place-based practices (e.g., community food security assessments, mapping existing and potential sites for urban agriculture and current demand, conducting regional foodshed analyses, devising comprehensive food systems strategies and plans, among many others). Local government provisions, such as zoning and financial incentives for fresh food stores, bans on fast food outlets in school districts, removal of building code barriers for rooftop greenhouses, or reducing restrictions for onsite processing and selling of produce, are also part of the bundle. Thus, differently from other niches for social innovation, like the UK-based Transition Towns movement for instance, urban food planning novelties stretch beyond the circles of citizens’ groups and community advocates alone.

Each practitioner involved in urban food planning possesses distinct strengths and competitive advantages to advance the global Agenda for just and sustainable food systems. Beginning to map and recognize such strengths, alongside the obvious limitations of working in a niche, is a task that needs to be timely addressed. One of the biggest challenges in trying to map a transition process in its early stages of development, however, is that the speed of change is such that by the time one takes a snapshot of a fragment of the system, the entire landscape has already changed – some novelties have died out, others have moved on, and new ones have emerged. This can be frustrating for the academic investigator, let alone the planner practitioner or the policymaker, seeking to legitimize their research, long-term plans, or policy recommendations. Yet, as food systems planner Martin Bailkey recently put it, not being able to keep up with the pace of innovation in the field is “a good challenge to have.”

A more stable suite of urban food planning practices has the potential to transition urban food planning from an unstable niche to a robust social innovation in the position to challenge incumbent planning and food system regimes, helping local governments and communities to pursue a “bolder vision for the city.” Strategic levers for change include opportunities to strengthen present endeavors to represent, understand, and transform the urban food system, as well as to legitimize city-level interventions in the public domain, but also to question its current assumptions and ideologies. In fact, as the narrative of the book cruises through different food planning novelties, the reader is cautioned that there is nothing inherently good in a new practice per se, nor there is anything inherently sustainable in the scale at which practices are carried out, however, both new ideas and local actions are fundamental in imagining and enacting societal transitions. And we, planners and allied professionals in the Global North, have the moral obligation to be at the forefront of this institutional and environmental transition.

Finally, the focus of “Urban Food Planning” is on experiences from the Global North, not because food systems planning innovations do not manifest in developing economies regions – in fact, they greatly do, but because the impact of rich cities on their local and global hinterlands is so extensive and, at the same time, so scarily well concealed, that every effort to address it offers a rare chance to break the myth that we are living in a benign and harmless cornucopia. Only by making visible and by appreciating the critical mass of city-regional food system innovations, taking place in our own backyards, can we debunk the delusion that food is working in the public interest and it is superfluous in sustainable urban development projects and strategies in wealthy states. The goal of integrating local food infrastructures in and around cities has been in urban planning’s DNA since its inception, but for over a century it has remained suppressed for cultural, political, and economic reasons. There has hardly ever been a better time to restore it.

There is a vacancy at the City Planning Commission for the Community Health Planning Assignment in the City Planner 3 specification.  This innovative position bridges public health and planning and as such is also a part of the Get Healthy Philly team.  Applications are accepted through 12/25. The assignment description is just below and the full specification (and application) is linked here: https://phila.peopleadmin.com/postings/26052

Represents Philadelphia City Planning Commission at events relevant to healthy planning goals; serves as a technical resource to community groups; solicits information from the community to establish health-related priorities; considers community input in planning process; engages design and development communities to build capacity and support for projects that support the healthy built-environment goals of the City Planning Commission and the Department of Public Health.

EDUCATION: Completion of a bachelor’s degree program at an accredited college or university in a field related to city planning*

SPECIFIC EXPERIENCE: One year of technical city planning experience at the full performance level in the area of assignment. 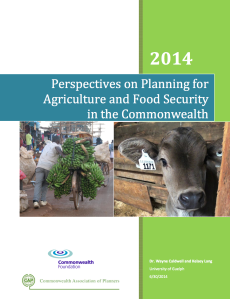 In recognition of growing global concerns about long-term food security, the Commonwealth Association Planners (CAP) has developed a report listing Strategic Directions that Commonwealth planners could use in food security planning. The report also contains a series of specific tools and strategies that planners can use to plan for agriculture and food security.

What is APA FOOD?

The American Planning Association Food Division (APA FOOD) is a coalition of planners and allied professionals who have come together to advance food systems planning at the local, regional, state, or national level. To join our mailing list and become an APA FOOD member, click here.